NOAA is the US National Oceanic and Atmospheric Administration. They currently have three satellites in orbit which regularly pass over Europe: NOAA 15, NOAA 18, NOAA 19. They basically continiuously stream pictures back to earth using APT - Automatic Picture Transmission.

The data transmitted by the satellites can easily be received using your favourite flavour of RTL-SDR or other SDR hardware. While writing this I’m using a NooElec NESDR Smart and GQRX.

During reception one can perfectly hear the data transmission and watch it in the waterfall plot. Check the Files and Recordings section below for references.

When the satellite comes into range, simply hit the record button.

Before working with the recording, a bit of prep work using Audacity is necessary. As such open the file and perform the following steps:

For decoding the received data I’ve been using WXtoImg. You can simply start it from the command line by running WXtoImg -G. It also uses reference data from CelesTrak to create a map overlay over the satellite image itself. Have a look at the “Enhancements” menu for all the different options.

Reception of data is only possible, when the groundstation has line of sight with the satellite, as such you will want to do some tracking. The easiest approach seems to be using GPREDICT which can be found on github. GPREDICT will fetch satellite orbits from CelesTrak and visualizes them on a map. It will also predict time frames in which programmed groundstations are in line of site. 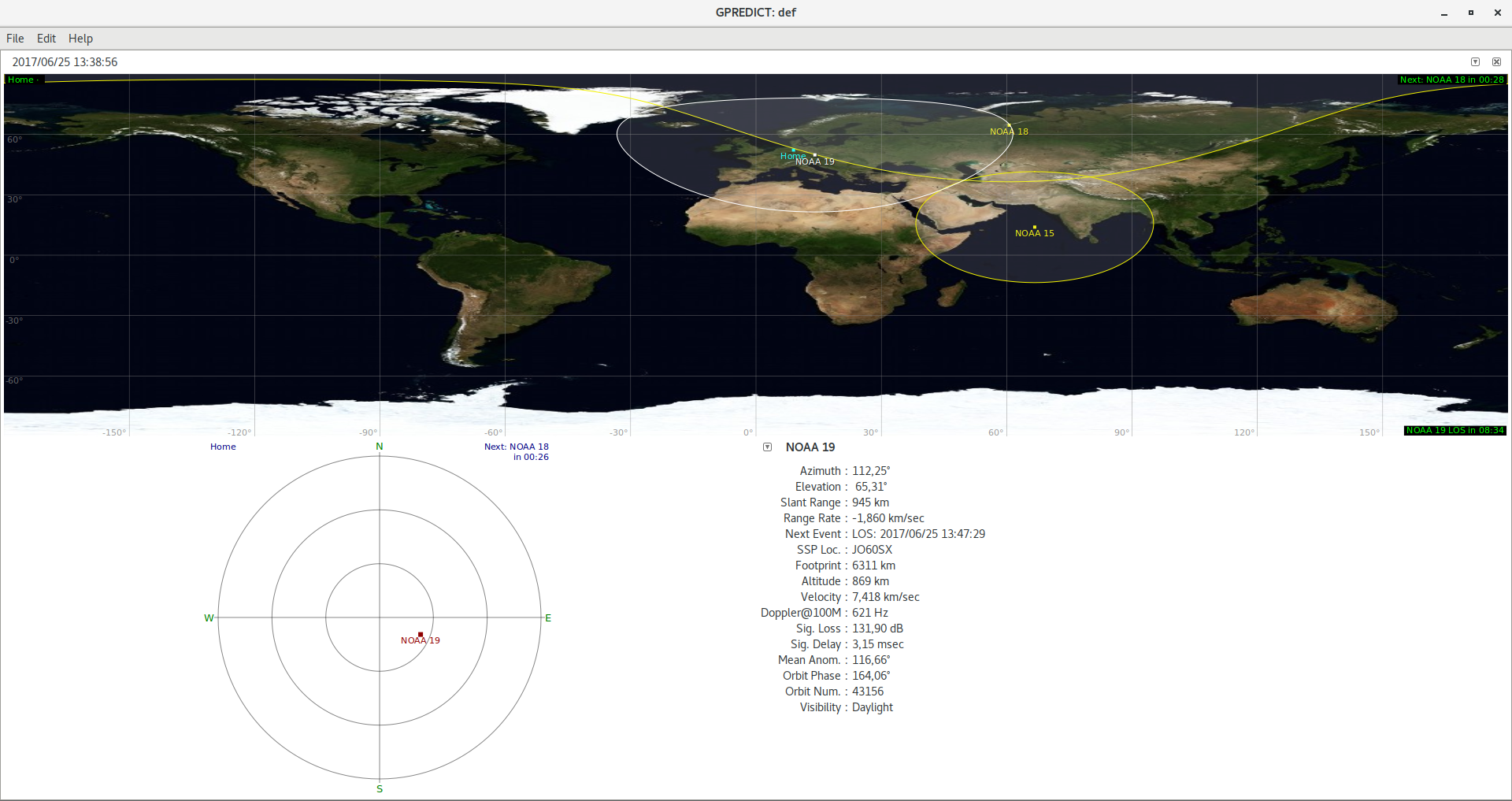 After doing a bit of reading decided to give building a Quadrifilar Helix (QFH) Antenna a try.

I used a 40mm pipe for the center rod and 16mm cable duct for the “arms”. The actual conductor is 10mm² solid core wire (Erdungsleitung). Building the antenna was rather straight forward:

n. Days of fiddling with the wires and trying to get them into shape

Before setting up the antenna in the attic I gave it multiple test runs in the garden at rather low elevation. One side was partially covered by the mountain range the house is one, one by the house itself, the third partially by our neighbours house. All in all resulting in a rather s***ty place to put an antenna. 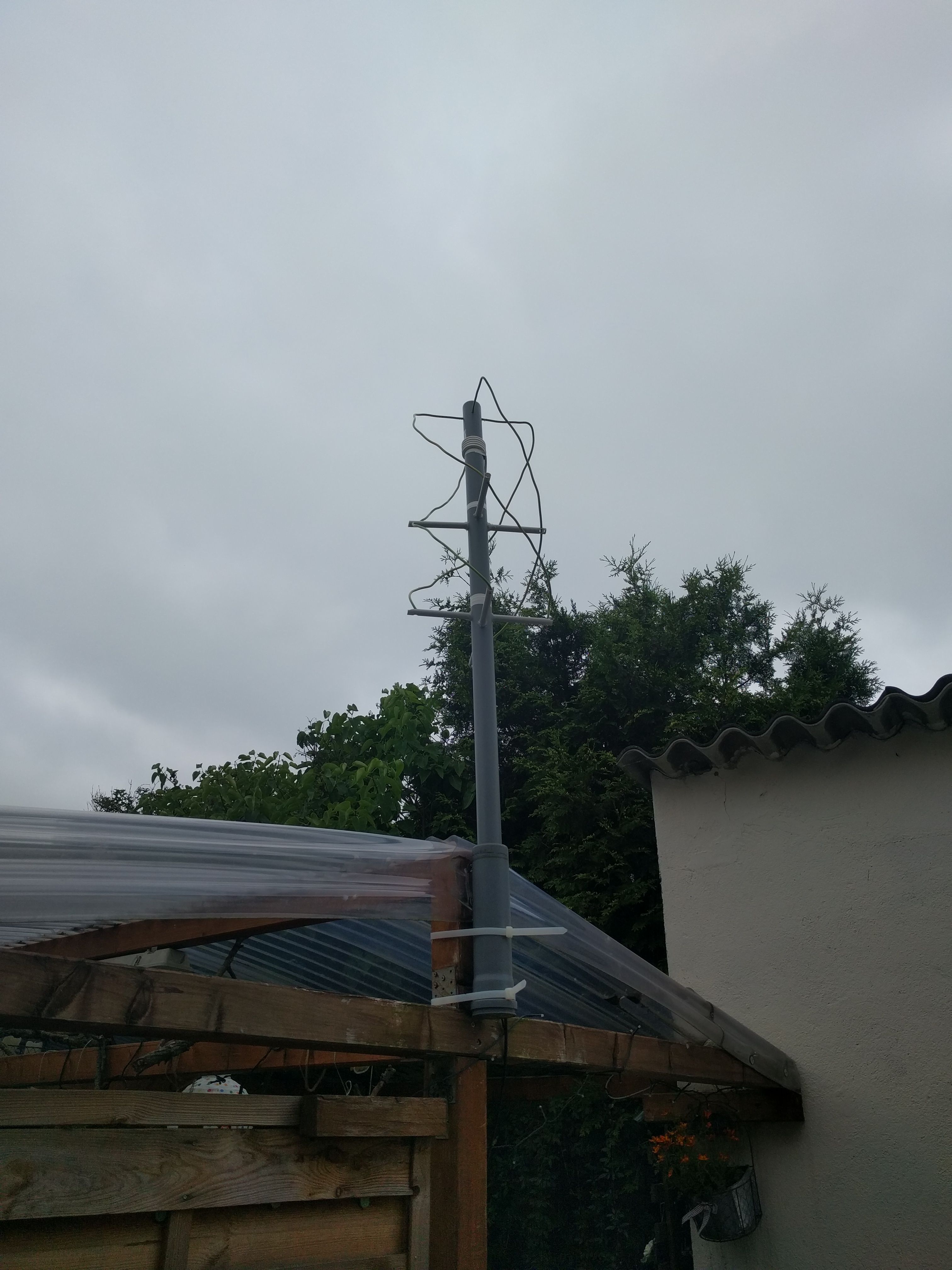 After a few days I shifted the antenna into the attic, ~4th floor. While the time frames in which I received data from the satellites rose significantly, the overall signal quality dropped. As expected the tiling is a good shield, especially when it’s wet (rain reduces reception to zero). 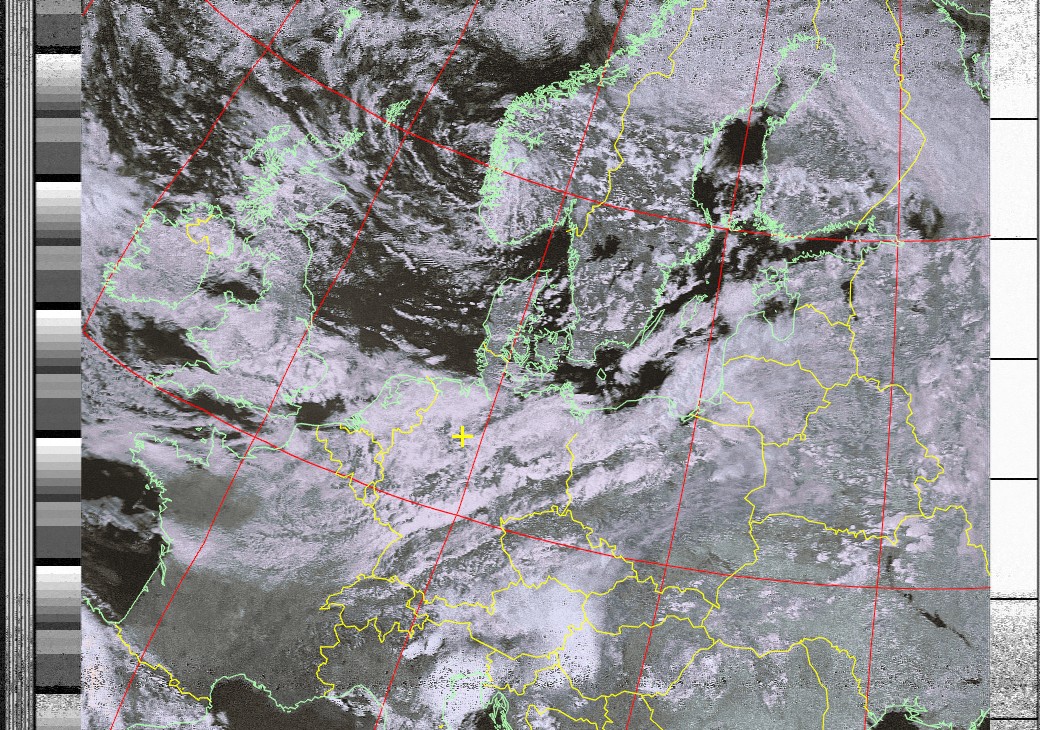 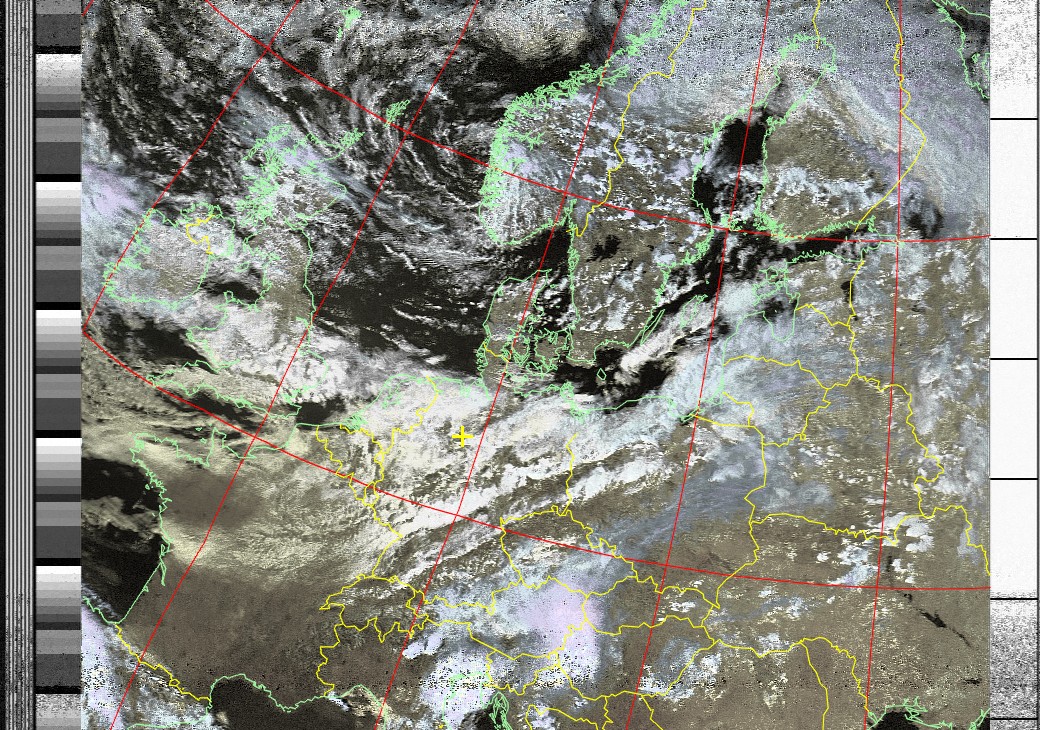 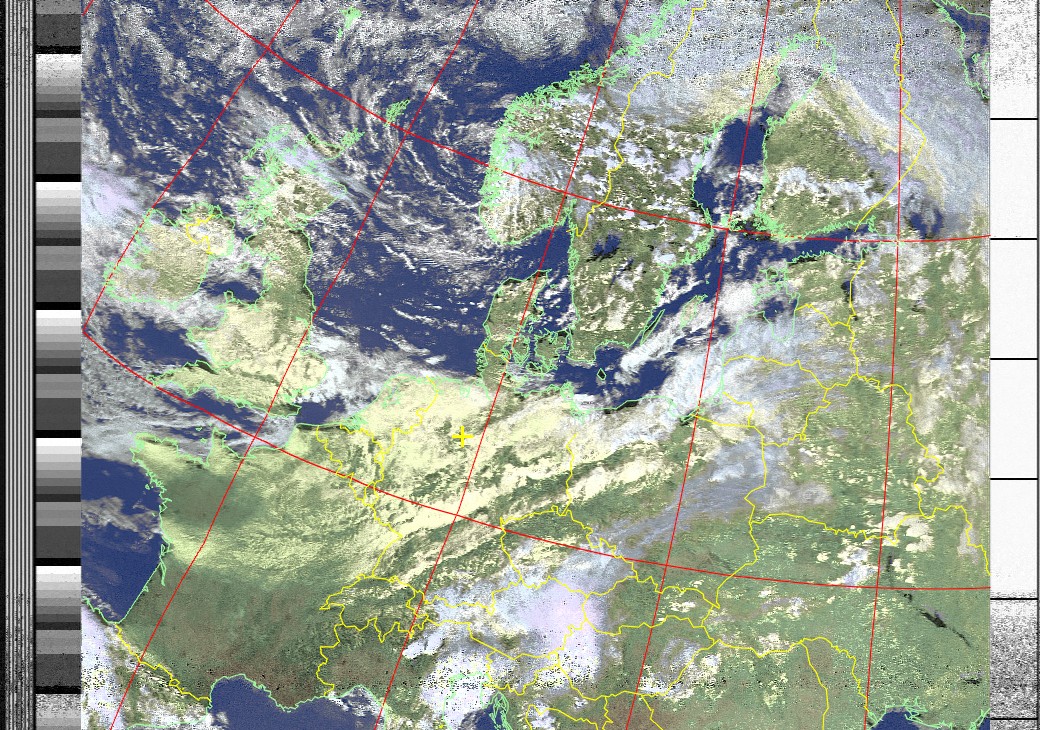 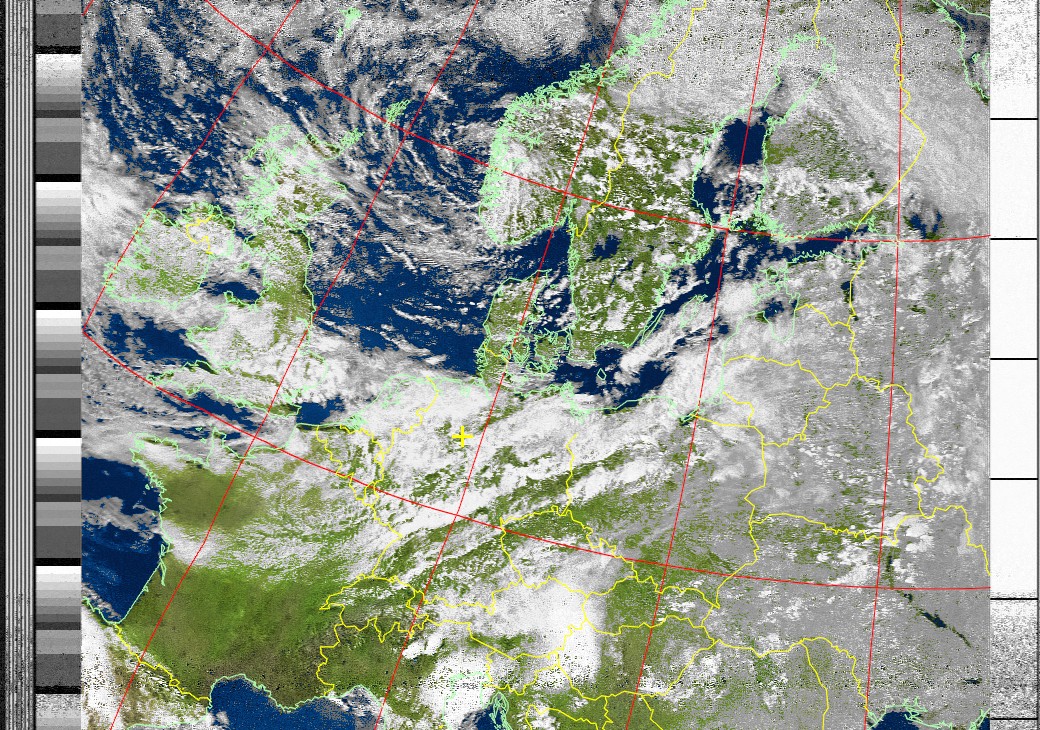 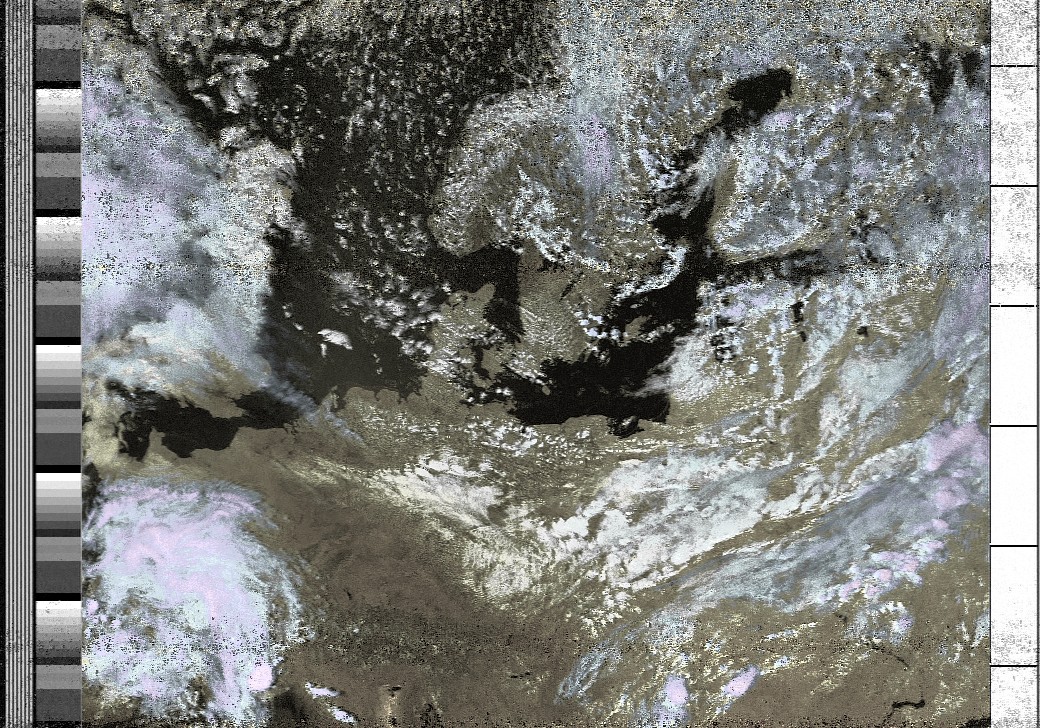 WXtoImg seems to be a really piece of software for working with the received images. While development has been stopped the pro version has been made free. The license key on the webpage will seemingly “not work” as it’s limited for use in 2016. As such there are various workarounds which are based on setting the system time to 2016, starting WXtoImg and changing the year back to 2017. Still the free version seems sufficient.

Also WXtoIMG often does not recognize the satellite pass the image comes from. So far I have not found a proper solution for this problem.