It seems that Hackers have a significant interest in Adrenaline and Epi-Pens: How they work, what they look like and how to use them. So, due to “having access”, I decided to write a short post with a “demo”. Obviously, above being interesting, it’s good to know how to use them.

Adrenaline / Epinephrine is a naturally produced hormone, which plays a role in the flight-or-fight response. It increases the heart rate, blood flow, blood sugar levels and thus makes one more alert and “energetic”. Stupidly said, it helps to keep one alive when the body is on its way out. As such it’s used in the treatment of allergic shock. Above “just keeping one going” it also counteracts various symptoms (i.e. swellings) throughout the body and may also be used as an initial treatment to stop an allergic reaction when it begins.

When talking Adrenaline, most Hackers are directly reminded of a scene in Quentin Tarantino’s Pulp Fiction from 1994. Where Vincent Vega (John Travolta) saves Mia Wallace’s (Uma Thurman) life by giving her an injection right into her heart. As such, when people hear one has Adrenaline, they simply can’t wait for a chance to give it a try! (Yes, I know not all of them are serious about it) 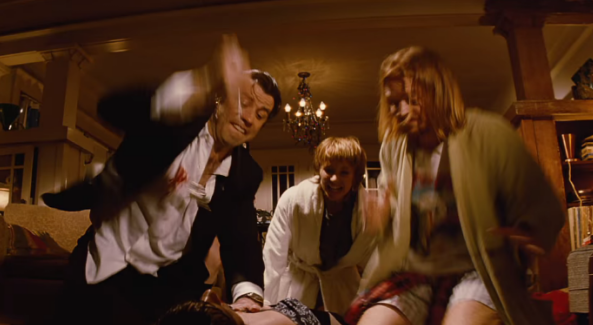 After the initial lough, most are actually rather interested in seeing an Epi-Pen and actually working out how it works. Some, simply due to being Hackers and seeking new knowledge, others (the ones I spend more time with) just want to know what to do when it becomes necessary. Both luckily and sadly, Epi-Pens come with a Best-by-Date after which the manufacturer can’t guarantee that the medication can still provide the required effect. This means they regularly need to be exchanged (1-2times / year) and one has an old one at hand. So why not make the best of it? The following picture shows a FASTJEKT pi-pen manufactured by MEDA Pharma.

How do you use it?

Usage is rather simple, you pull off the cap on the back and then press it against the victim’s / patient’s thigh / upper leg, the outer side. The Adrenaline is supposed to be injected into the muscle. Concerning the thighs, a doctor told me it poses the smallest chance of hitting a blood vessel down there and also the least chance of damaging anything (he actually added, “when you don’t have a pulse anymore, you won’t need the leg anyways…”).

It is important to note, that different models have different mechanisms, thus the individual instructions are printed onto the pen.

Adrenaline has two very important effects: Firstly, it activates various mechanisms in the body and thus results in fading of potentially dangerous symptoms, like swellings and rashes. Secondly it simply keeps the body going by increasing the heart rate and the blood flow. Following the effects Adrenaline is very helpful with serious allergic reactions. When used early it can halt the overall reaction and give time for the other medications to kick in (i.e. reduce swelling around the airways and allow breathing). When taken later on it can prevent one from dropping into or help recover from an anaphylactic shock (which usually includes a shutdown of the circulatory system). Thus, it’s a simple and effective way of saving a life. It should be obvious that using Adrenaline isn’t the healthiest thing one can do. Interestingly the information on this is rather simple: “When used in an emergency, there are no known contraindications” (“Während der allergischen Notfallbehandlung sind keine absoluten Gegenanzeigen bei Verwendung des FASTJEKT bekannt.”)

The fun part I: Using it!

Best way to show is a short video! But … as this page only consists of static content, I don’t have a video player. So, here a quick gif, a direct download link, and a link to YouTube!

The fun part II: Dismantling it!

First step would be to remove the sticker, but I already did so before filming.

The pen consists of a plastic tube with a spring-loaded mechanism. The inside is held in place by three plastic clips on each side.

After loosening the pins, the pen will simply jump apart, shooting pieces (including the vial with the needle) into the air. (I probably should have expected something like this!) 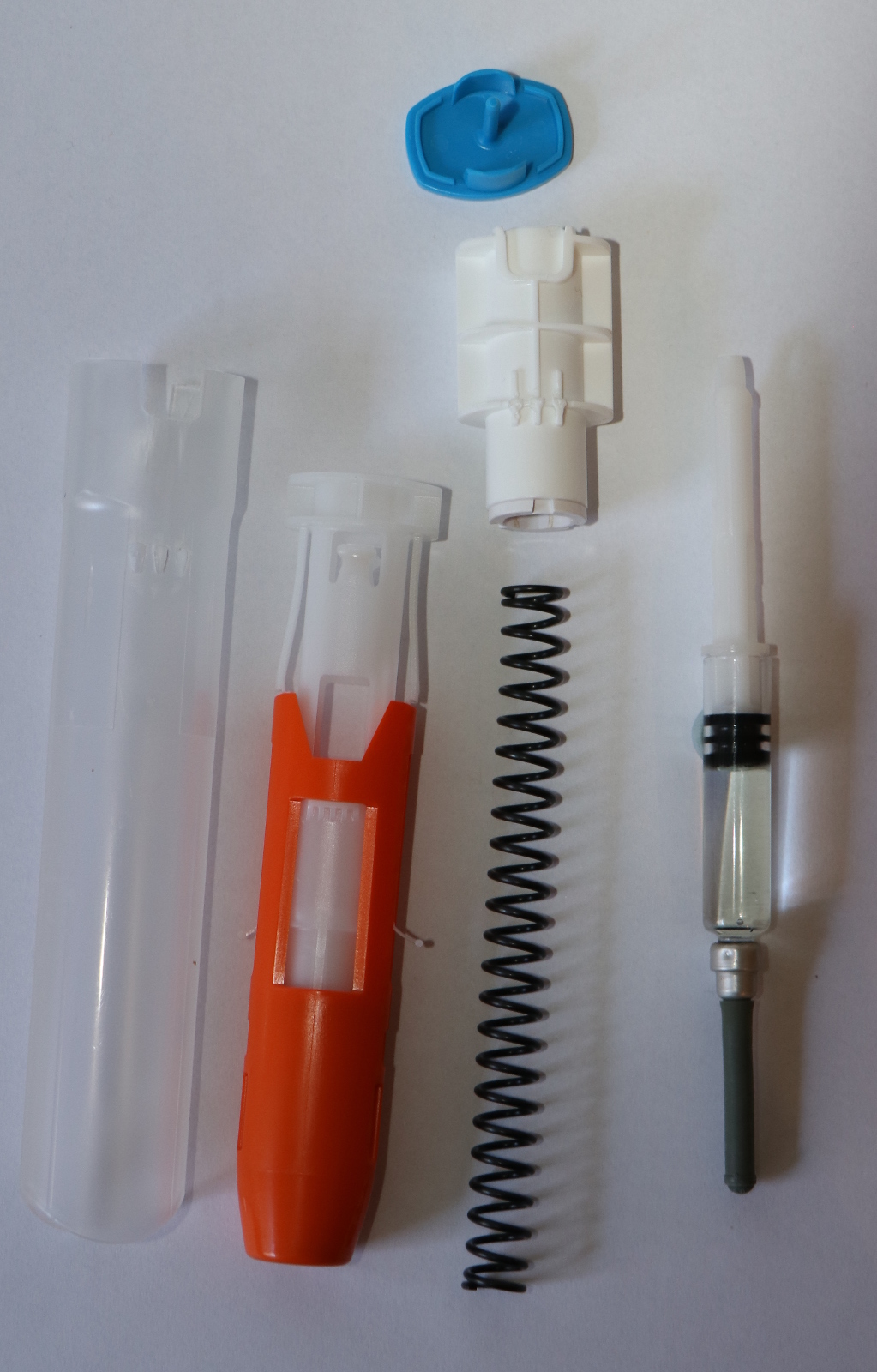 So, it consists of a rather strong spring, a vial with a rubber tube on the back, which is sealed and convers the needle and a few plastic parts. From left to right:

Although the instructions say, that “some” adrenaline may stay in the vial, for safety reasons, I’m surprised, that actually only a third of the content is used. Thus, if necessary, in an emergency situation, one might actually be able to get a second dose from a used pen.

So how does the mechanism work?

The safety cap spreads the top of the plastic rod going into the vial and secures it in the top piece. 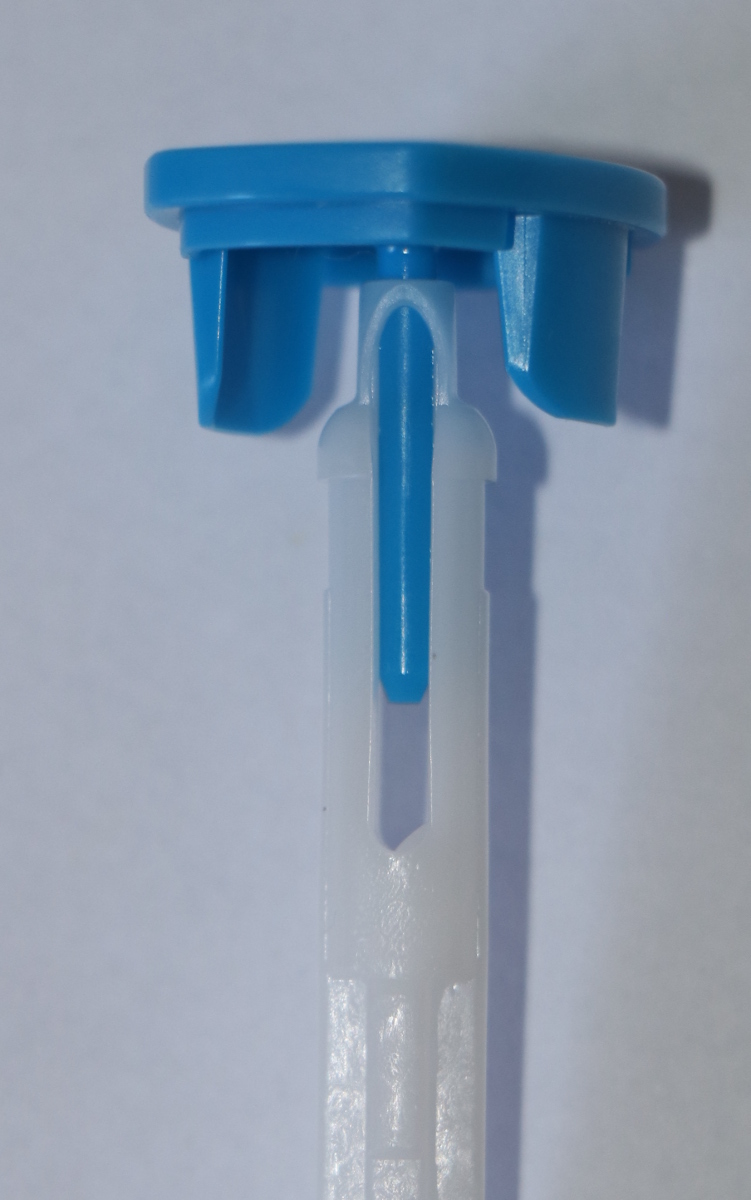 The rod can only push into the liquid after the pin has been removed.

When pressing down the pen, the vial shifts two small arms on the side of the inner body and directly releases the spring-loaded orange safety cap, which afterwards covers the 18mm needle. At the same time the plastic rod with rubber rings is pushed into the vial, releasing the liquid. The rod also pushes the vial with the needle downwards. This way the liquid is released while the needle is moving.

The cap itself is also spring loaded with a separate small spring. After been used, the orange cap is fixated by two plastic arms, which can be seen on the picture showing all the parts.

There are two small holes in the outer case, which are obviously used when loading the pen, as they’re in the perfect position to fixate the spring while not risking any pressure on the vial / rod. I might try to 3D-print a part to help me reload it.